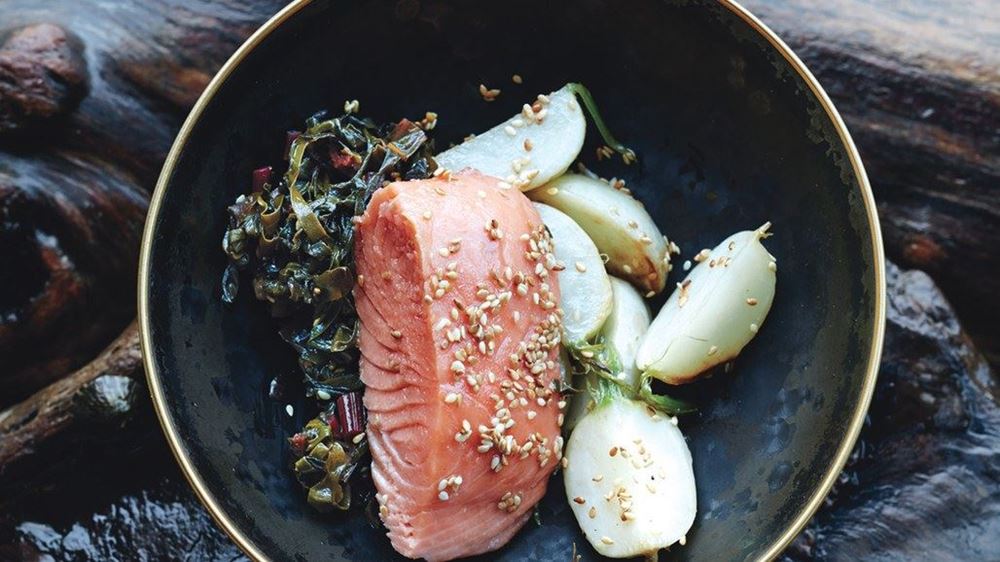 Preheat oven to 250°F. Place salmon in a large baking dish; drizzle with 2 tablespoons olive oil, sprinkle with lemon zest, and gently rub. Season with salt and scatter garlic around. Bake until salmon is medium-rare (mostly opaque but still slightly translucent in the center), 30–35 minutes. Meanwhile, combine turnips with 1 tablespoon olive oil and 1 cup water in a large skillet. Season with salt and pepper. Bring to a simmer, cover, and cook until turnips are fork-tender, about 15–20 minutes. Uncover and cook, tossing occasionally, until liquid is evaporated and turnips are golden, about 5 minutes. While turnips are cooking, remove ribs and stems from chard leaves and thinly slice them. Heat remaining tablespoon of olive oil in another large skillet over medium-high heat. Cook shallot and chard ribs and stems, stirring often, until beginning to soften, about 3 minutes. Add Swiss chard leaves and cook, tossing often, until leaves are wilted, about 2 minutes. Toss in cilantro, parsley, lemon juice, and a little salt. Drizzle salmon with sesame oil and serve with chard and turnips. Sprinkle with sesame seeds, then enjoy!

We love coming home to our weekly fruit box. Having two small children it means we always have plenty of fruit in the house which makes meal and snack times a lot easier! It helps that the Beanies team are all super friendly and helpful.